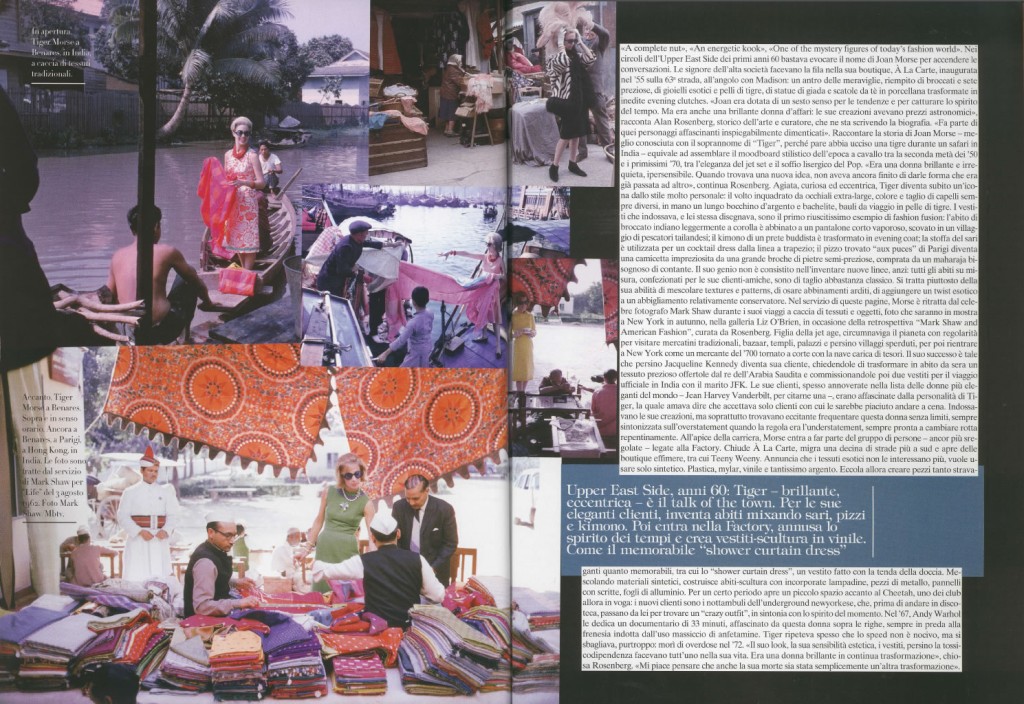 Translated from Italian via Google Translate- Sorry for the odd translation:
TIGER MORSE
AN INSPIRATIONAL JOURNEY
Tell the life of Tiger Morse is how to assemble the moodboard style between 1955 and the early 70s. Unique figure in fashion, went through the splendor of the jet set and was lysergic of Pop. Inventing chic in key ethnic

“A complete nut,” “An energetic kook,” “One of the mystery figures of today’s fashion world.” In the circles of the Upper East Side of the first 60 years was enough to evoke the name of Joan Morse to turn conversations. The society ladies lined up in his boutique, À La Carte, opened in ’55 on 63rd street, on the corner of Madison: a cave of wonders, filled with brocades and silks, jewelry and exotic tiger skins , statues of jade and porcelain tea boxes turned into unusual evening clutches. “Joan was equipped with a sixth sense for trends and to capture the zeitgeist. But he was also a brilliant businesswoman: his creations had astronomical prices, “says Alan Rosenberg, art historian and curator, who is writing a biography. “It’s part of those fascinating characters inexplicably forgotten.” Telling the story of Joan Morse – better known by the nickname “Tiger” because it seems to have killed a tiger during a safari in India – equivalent to assemble moodboard stylistic era at the turn of the second half of the ’50s and the early’ 70, between the elegance of the jet set and the breath of lysergic Pop. “She was a brilliant and restless, hypersensitive. When was a new idea, had not yet finished shape it was already passed to another, “continues Rosenberg. Affluent, curious and eccentric, Tiger immediately became an icon very personal style: the face framed by glasses extra-large, color and haircut always different, holding a long cigarette holder silver and bakelite, travel trunks leather tiger. The clothes he wore, and she drew, are the first successful example of fashion fusion: the Indian brocade dress slightly flared trousers is mated to a short fluffy, discovered in a Thai fishing village; the kimono of a Buddhist priest became evening coat; the fabric of the sari is used for a cocktail dress from the line trapeze; the lace found “aux puces” Paris becomes a blouse adorned with a large broche of semi-precious stones, bought by a maharaja in need of cash. His genius was to invent new lines, indeed: all tailored suits, made for its customers-friends, are cutting quite classic. It is rather his ability to mix textures and patterns, to dare daring combinations, to add an exotic twist to a relatively conservative clothing. In service of these pages, Morse is portrayed by renowned photographer Mark Shaw during his travels in search of fabrics and objects, pictures that will be on display in New York in the fall, in the gallery Liz O’Brien, on the occasion of the retrospective “Mark Shaw and American Fashion “, curated by Rosenberg.

Daughter of the jet age, circumnavigates the planet regularly to visit traditional markets, bazaars, temples, palaces and-up remote villages, and then returned to New York as a merchant of the ‘700 returned to court with the ship loaded with treasures. Its success is such that even Jacqueline Kennedy becomes his client, asking her to turn in evening dress a precious fabric offered to her by the king of Saudi Arabia and then two commissionandole clothes for the official trip to India with her husband JFK. His clients, often counted in the list of the most elegant women in the world – Jean Harvey Vanderbilt, to name one – were fascinated by the personality of Tiger, who liked to say that he accepted only customers with whom she would like to go to dinner. Wore his creations, but most were exciting attend this woman without limits, always tuned sull’overstatement when the rule was the understatement, always ready to change course suddenly. At the height of his career, Morse joined the group of people – even more unruly – related to Factory. Closes À La Carte, migrates a dozen roads to the south and opens the ephemeral boutique, including Teeny Weeny. Announces that the exotic fabrics are not interested anymore, wants to use only synthetic. Plastic, mylar, vinyl and much silver. Here she then create pieces so extravagant as memorable, including the “shower curtain dress”, a dress made with the shower curtain. Mixing synthetic materials, builds sculpture-dresses with built-bulbs, pieces of metal, panels with inscriptions, aluminum foil. For a time he opened a small space next to the Cheetah, one of the clubs in vogue: the new clients are night owls of the underground New York, who, before going to the disco, go to her to find a “crazy outfits”, in keeping with the spirit of the moment. In ’67, Andy Warhol devotes a documentary of 33 minutes, fascinated by this woman over the top, always in a frenzy induced by the massive use of amphetamines. Tiger would often say that the speed is not harmful, but he was wrong, unfortunately, he died of an overdose in ’72. “His look, his aesthetic sensibility, the clothes, even the drug did in his whole life. She was a brilliant woman in continuous transformation, “Rosenberg gloss. “I like to think that his death was simply another transformation.”

Upper East Side, 60: Tiger – brilliant, eccentric – is the talk of the town. For its smart customers, invents mixing sari dresses, lace and kimono. Then enter the Factory, sniffs the spirit of the times and creates clothes-sculpture vinyl. Like the memorable “shower curtain dress”